So almost a year ago I gained a few pounds. Last summer I was about 117lbs. Then few months later I gained about 5lbs. Then I gained another 5lbs, total of 10lbs. Big difference for my body. And of course, Thanksgiving was around the corner, and I definitely wanted to splurge a little and didn’t want to not eat some certain foods cause that’ll just upset my family. When I’m eating with my family and having a family dinner, I want to enjoy my meal and not complain or say “Oh I can’t eat that cause I’m trying to eat clean.” I mean, I’m sure there are food that I could eat clean or can make it more healthy, however my family aren’t into that. When they eat, they want to eat good with the fatty stuff. So I thought maybe I’ll lose some weight and just gain it back for Thanksgiving, make it even. But I wanted to lose weight QUICK. Only method I could think of to lose weight ASAP, is the Lemonade Cleanse. The Lemonade Cleanse is a cleanse where you don’t eat any solid food and only consume this drink containing lemon, cayenne pepper, grade b maple syrup, and water. In the morning right after you wake up and at night right before you head to bed you drink laxative tea. The taste wasn’t actually that bad, to me it was pretty tasty. The sweetness from the maple syrup and citrus from the lemon then the kick from the cayenne pepper really gave me energy. Taking a sip of it you first taste the sweet tart flavor then bam! The cayenne pepper sneaks you up behind the throat and you feel the burn. Now did I lose weight from this cleanse? Of course I did! I was pretty much starving myself for 7 WHOLE DAYS!!! I lose a total of 13.4 lbs in ONE WEEK. Now, before you guys start thinking of going to the super market to buy bags of lemon, cayenne pepper, and think of where to get specifically grade B maple syrup, I warn you this is a very dangerous cleanse. I would only suggest people this cleanse if they need to lose weight for a photoshoot or if you just want to lose weight for an even but don’t mind or expect to gain weight back, because that was what happened to me. The Lemonade Cleanse was a cleanse that I sort of regret doing. I say sort of because now I feel like I learned my lesson. Yes before I used to be “oh lose weight the healthy way, eat clean and workout.” But because of the weight gain I was just desperate and crazy, yes crazy, to lose weight ASAP. 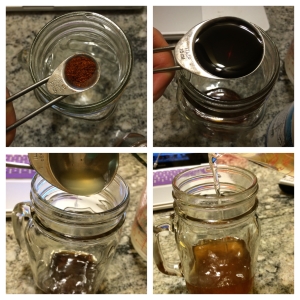 First, let me tell you my experience with the cleanse. People say that the first three days are hard, but for me, every day was hard. Right after work I would go straight to my bedroom and lock myself in there so I can avoid food and the smell of it. During my lunch break at work, luckily there’s a quiet room where I would just hide and drink my lemonade and take a nap til my 30 minutes were up. And because I was drinking the laxative tea twice a day, whatever came in just went right out (duh it’s a cleanse, it’s cleansing my body). Every day I was losing weight and because of the weightloss, I got wicked excited and it just motivated me to continue the cleanse. It felt so good to have clothes feel a bit lose on me and to just wake up with a flat belly. I was contemplating in doing the cleanse for an extra 3 days because supposedly it’s supposed to be a 10 day cleanse but I just couldn’t, I love food and I was content on where I was at after the 7th day. So after the cleanse you’re supposed to consume only liquid for the next 2 days, either 100% orange juice or 100% grapefruit juice, as in freshly squeezed juice! Not that Sunny D crap. On my second day after the cleanse I actually snuck in a grapefruit, but I don’t think it made much of a difference. Now the aftermath of the cleanse… They say you either gain more than the weight that you lost or you’re able to just gain a couple of pounds back but still less than what you lost. Unfortunately for me, I gained more than what I lost. I gained almost 20lbs! Yea, so much for telling people “Oh I’ve lost 60lbs”, I had to say “Oh I lost 60lbs but gained 20lbs so in total I lost 40lbs”. I guess to some people losing over 30lbs is good enough but I had a goal and my goal was to be 115lbs (I’m 5’3″ for those who are wondering). After the cleanse, when I was welcoming the food back into my body I thought to myself, “Oh, I’m just eating this and that, I’ll probably just gain 2lbs so I’m still good.” But no, I gained 10x as much as I thought I would. 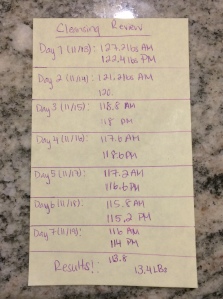 My review and results from the Lemonade Cleanse
BTW I snapped a picture of myself right after I woke up and weighed myself.
So please don’t mind my messy look.

In my opinion, I think the Lemonade Cleanse just messed up my whole body and maybe confused it. Cause after the weight gain, I tried to lose weight the semi right way. I was working out to T25 in the morning before I had to go into work and was eating about 1000-1200 calories a day then I worked out to P90x3 after work with my brother and I was still no where near the weight I wanted to get back to (117lbs). But then I heard and see that I put my body in starvation mode? Maybe that’s why I wasn’t getting back to my weight? I don’t know, I’m not a nutritionist or a personal trainer so all this weight loss and trying to be healthy and fit was something I learned on my own. I had no personal trainer to help me and I did not sign up for those weight loss system like weight watchers or Jenny Craig.

So there you have it guys, my personal experience with the Lemonade Cleanse. Like I said, I highly suggest people to NOT do it unless they need to lose ASAP for an event and are okay with gaining the weight back, unless you have self control. If there are any questions or anything please leave a comment.

And the photoshoots I did after my weightloss.